COBCOE awards showcase and celebrate British-European business talent across our European network. The Chamber of the Year awards are announced at the flagship COBCOE annual Awards Dinner held in the heart of London.

The 45th Anniversary Awards Dinner and Dance will take place on 9 October 2018 at The Brewery in London. 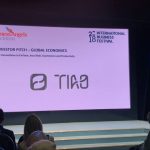 The Investor Pitch at the International Business Festival in LiverpoolEvents