We are pleased to announce that Voka, Mechelen-Kempen has officially joined our safe and trusted network on CONNECTS. Voka, the biggest Flemish network of enterprises, was established in 2004 as an alliance of the then eight Flemish Chambers of Commerce. As a network, we unite more than 18.000 businesses representing 65% of the private employment and 70% of the added value in Flanders and Brussels. As one of the most influential network of entrepreneurs, its mission is to create an optimal framework for successful entrepreneurship. 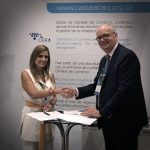 Barranquilla Chamber of Commerce joins ConnectsNew chamber on board